On May 17, Clark County District Attorney Steve Wolfson announced the expansion of his Gun Crimes Unit in light of the increase of shootings in the Las Vegas area. The expansion consisted of only one deputy district attorney. 'Expanding' the unit by one deputy DA is misleading at best and nothing more than 'feel good' hype from a politician-lawyer all hot and bothered with his own TV show. Criminals will surely not quake in their shoes knowing another prosecutor is on the team to nail them to a cross, or plea bargain, I mean.

The Gun Crimes Unit has nothing whatsoever to do with straw purchases, tracking down armed prohibited persons (just if arrested), or gun sales that are already illegal under state and federal law. Proactive enforcement of gun laws on the books is not an issue, but Wolfson thinks one more gun law will make difference. A few weeks prior to this announcement, Wolfson also announced that he supports infringing on the right to bear arms, specifically by banning private gun sales via his support for Ballot Question 1--universal background checks.

Criteria for the Gun Crimes Unit case selection is as follows:

1. Violent crime cases involving a firearm that are complex due to such factors as:
a. Multiple defendants
b. Multiple crime scenes
c. A complicated investigation

3. All single event robbery with use of a deadly weapon cases where a traditional firearm (not a BB, pellet, pneumatic gun, etc.) was the deadly weapon.


4. All invasion of the home while in possession of a firearm where a traditional firearm was used. 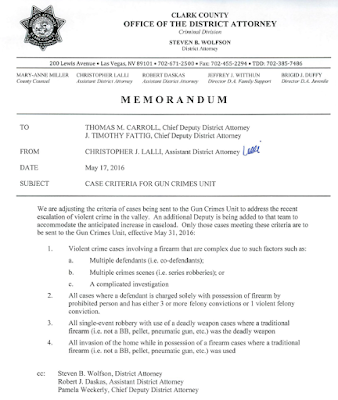 Posted by nevadacarry at 8:40 PM