Supporters of gun-rights gathered to counter-protest a gun control rally (under the guise of 'gun violence') at Henderson's Cornerstone Park on Thursday, June 2. It was organized by Michael Bloomberg's Everytown for Gun Safety/Moms Demand Action for Gun Sense in America. The gun control groups self-proclaimed June 2 as "National Gun Violence Awareness Day" and perverted the hunting safety color orange for their purposes. The cabal that organized this stunt is the same that brought you Ballot Question 1, aka universal background checks, which will ban private gun sales.

On a days notice, about two dozen unpaid gun rights supporters arrived. Unarmed security guards were present to 'protect' the anti-gun rally. Pro-gun supporters were quiet and respectful, mostly staying in their own area.

Unfortunately, lesser numbers of gun rights supporters were present, although in contrast to the last such event, local media did extensively interview members of the Nevada Firearms Coalition and other supporters. The particulars became public in Wednesday's edition of the Review-Journal. It seems that the information was kept confidential (Everytown's website at last check requested one RSVP for details) likely to prevent a counter-protest from being organized effectively. After being outnumbered by pro-gun supporters last December the paid organizers who setup these 'grassroots' rallies don't want to embarrassed like that again.

Having seen some of the families that lost loved ones to murder and suicide, it's horrific to see a brazenly anti-gun organization co-opt these grieving families for their own sick, twisted disarmament purposes. Some supporters say that the guns aren't the problem, but people are, all while failing to acknowledge those killed by 'regular' violence. One wonders who advocates for those killed by knife, fist, blunt object, and vehicle violence and if they will have such a remembrance day.

One must question the purity of motives of an organization founded and funded by a billionaire and other billionaires which primarily works to enact gun control laws. The Bloomberg groups are a hydra-headed monster which includes the disingenuous gun reporting service The Trace, had frequently fabricated reports and massaged data, and consistently misrepresents its purposes. Interestingly, the associated group Mayors Against Illegal Guns, has largely fallen by the wayside after lots of high-profile arrests of mayor for various crimes, including gun crimes.

A terrific under appreciated gun safety organization, one which avoid politics altogether, is Evolve Gun Safety. Their marketing of the gun safety message is unparalleled and speaks in blunt terms of the destructive and devastating consequences of improper firearm use and storage.

Fox 5's reporter Mike Doria demonstrated on Twitter once again that local media (and the mainstream media in general) is biased in favor of gun control and has little objectivity. By wearing the color orange and making such a statement, he has aligned himself with a side in the debate. Doria has clearly deluded himself into thinking that the Bloomberg groups' aim is not gun control and ultimately gun confiscation with their perverted holiday. As Somme Guy (that's really his Twitter name) shows, Doria demonstrated an absolute lack of knowledge about the Bloomberg groups. If he asserts that they support the Second Amendment, he is a either a liar, a fool, or incredibly naive.

Doria states that the Bloomberg groups support the Second Amendment, when any such statements are a bald faced lie evidenced by their repeated and determined actions to undermine the right to keep and bear arms without infringement. 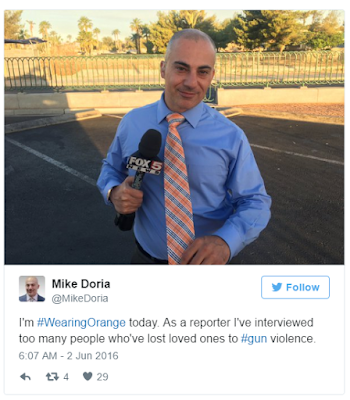 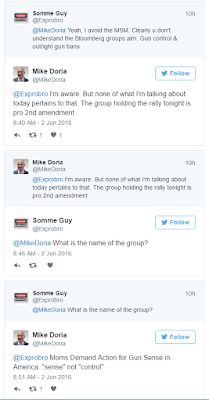 Doria opined that Mr. Guy and those like him complain that local media manipulates gun stories. Articles covered on that blog have shown several examples of selective editing and other deceptive tactics. Here is the Fox 5 evening news piece. Watch it and judge any bias or manipulation for yourself.

We here at Nevada Carry don't hide our bias. Even so, we do believe in honest reporting and objective analysis of the facts. For too long, local media has relished in reporting gang murders, drive by shootings, and horrific acts of violence for viewers and ratings helping drive violence by encouraging sick killers who want to see their acts on TV. Katie Couric's latest lie being exposed shows that at all levels of the media, dishonest reporting on guns is the norm. Supporting a farcical 'gun violence' day and failing to admit that the groups behind it have an agenda is wrong and abusive of viewers who don't know any better. However, as a few examples covered on this blog have already show, local Las Vegas media cannot be trusted to consistently report the truth about guns.

As Saint Paul said, we have renounced secret and shameful ways by setting forth the truth plainly (paraphrased and in a different context, obviously).

Posted by nevadacarry at 8:00 PM

Email ThisBlogThis!Share to TwitterShare to FacebookShare to Pinterest
Labels: everytown