Ignorance of the gun carry laws has reared it's ugly head once again. People break the law unintentionally because they were negligent in knowing the law and understanding it. I know it's harsh, but far too many people think they have a grasp on the law when they know just enough to get themselves in trouble. This could all be solved by people reading and understanding. Unfortunately, many people don't take the time to do so or assume they know it all.

There is no excuse for not knowing these things. It's pretty simple:

Public buildings are government owned and operated buildings, not private property open to the public. "No gun" signs do not have the force of law in Nevada; except for concealed carry in public buildings.


Open carry is 100% legal in all public buildings but for school/college/university or child care facilities, no matter what the sign or staff says.

So if it's a government building and there are signs or metal detectors at each public entrance, concealed carry is illegal. Don't carry illegally past the signs anyway and certainly don't brag about it online or to the local news media. 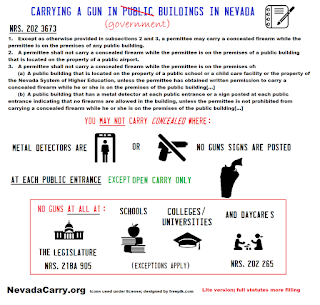 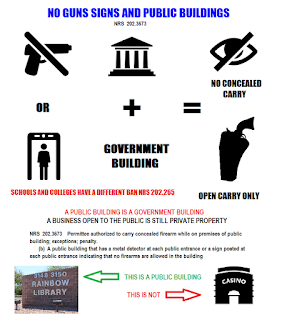 Staff in government buildings often don't know the law. The same goes for police. Open carriers may face harassment simply because the staff don't know better. It is your duty, however, to know better. Not taking the time to make certain you understand the law is laziness.

There is no excuse whatsoever for not properly knowing the law and understanding it. If you do not understand this stuff, you shouldn't be carrying and you sure as heck shouldn't be forcing the issue anywhere. Know before you go or face the consequences. Ignorance of the law and stupid behavior by people who have little to no reading comprehension skills will make winning back our rights more difficult.

I'm pretty riled up at this stuff, so please don't take it personally.
Posted by nevadacarry at 10:07 PM