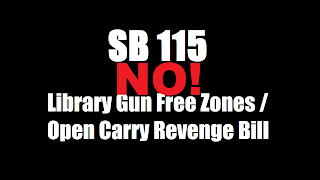 SB 115 would turn libraries into gun-free zones like schools, prohibiting guns even in the parking lots. The bill was created to “trump” challenges mounted by pro-gun activists against the Las Vegas Clark County Library District (LVCCLD), which has illegally enforced a gun ban. This came to a head when a mother, legally openly carrying her gun, was improperly arrested and filed a lawsuit based on state law that prohibits local gun rules or regulations. Despite what local media report and supporters claim, this bill exists because citizens stood up for their rights. Now, unscrupulous officials, elected and unelected, want to change the law because they don’t want to have to obey the law.

Letting SB 115 pass into law would:


Open carry in a library?

Yes, state law bans licensed concealed carry in public buildings (government buildings) where signs or metal detectors are posted at each public entrance. Open carry is not prohibited. If one wants to carry a firearm legally in a library, they must do so openly. State legal experts agree. Until the 1990s, concealed carry was generally demonized, whereas open carry was constitutionally protected.

Where this bill come from?

For nearly a decade, LVCCLD has illegally prevented open carry in its libraries. Many incidents have been recorded of legally armed citizens, minding their own business, being kicked out. The library bureaucrats made their illegal policy without a vote by the library trustees, thus breaking another law.

Citizens petitioned the district and trustees to remove the illegal ban, but the district continued to break the law. After enhanced state preemption of firearm laws was passed in 2015, allowing the option to sue for violations, LVCCLD was sued in 2016, but the case was lost in the pre-trial phase. Most preemption suits nationwide are won on appeal.

SB 115 would circumvent the preemption argument by prohibiting guns at libraries totally, just like at schools. This way, no lawsuit under preemption would work. LVCCLD officials are afraid that without SB 115, they will be sued again and lose.

What do the supporters claim is need for this bill?

Senator Denis asserted that he feels earlier legislation mistakenly left libraries out of the law. As the above context and quote (below) from the Assemblywoman show, Denis’ explanation is an excuse and probably a lie.

There wasn’t an “error” in preemption. LVCCLD doesn’t want preemption to apply to them. Emily Dickinson wrote “Tell all the truth but tell it slant,” and in this sense, Denis lied via not telling the whole truth when he stated he felt schools were “left out,” if indeed he felt that way.

The bill’s co-sponsor and former LVCCLD trustee, Assemblywoman Shannon Bilbray-Axelrod, admitted to local media that pursuing a legislative fix to the gun ban protest problem would be a priority. So yes, by their own admission, SB 115 is directly because of the open carry challenge.

“I think it’s going to be something we’re going to have to take up in the Legislature to make that distinction. I think it was a complete oversight.” (source)

What is state preemption and how does it apply?

State preemption of firearm laws prohibits any political or government entity other than the legislature from making gun regulations, except for unsafe discharge. The law specifically applies to cities, counties, and towns, but also gives only the legislature authority to make gun regulations. This keeps all state laws uniform and avoids someone unintentionally violating a rule when traveling outside the area they are familiar with.

LVCCLD claims that since library districts aren’t explicitly included that they can make rules that prohibit guns. NRA lobbyist Dan Reed pointed out that if true, a special “gun ban” district could be made and make all sorts of anti-gun laws because the statute doesn’t specifically mention special districts like libraries.

Who needs a gun in the library?

One could ask this same question about a school with the response being a litany of school shootings that may have been prevented by someone shooting back. In fact, a few school shootings have been deterred or stopped by good guys with guns. If guns aren’t needed at the library, then why does LVCCLD hire armed security guards? Surely if citizens don’t need guns, security doesn’t either.

No one knows when or where violence will strike. It could be a disgruntled employee, a random attack, or ordinary criminal violence. It can also happen outside the library. Many open carriers cannot afford the training and fees for a concealed weapon permit, so they have no choice but to carry openly. Since they choose to protect themselves in public, why should they be forced to decide between going to the library unarmed or not going at all?

What makes a library such a special place that guns should be forbidden there? If mass shootings occur in churches and schools, there is nothing sacred or special about a library. Legally armed citizens do not manipulate their firearms in public or leave them in reach of children and neither has there ever been an recorded act of violence by a legally armed Nevadan in a library here.

Without evidence of legally armed citizens causing a problem, why is a ban needed? And with the context of all the illegal behavior of LVCCLD, should we really excuse everything they’ve done wrong by passing this law?

What about the parking lot exemptions?

The proposed parking lot exemption was proposed because opponents of the bill pointed out that those dropping off books or otherwise using library parking lots would be affected, as the law in question prohibits firearms any part of the property. This is a cop out, not a good thing.

The exemption is meant as a feel-good measure to overcome objections without actually doing anything. Schools will not create a pro-gun parking lot policy and one cannot trust libraries like LVCCLD to make fair policy in favor of gun owners. On the other hand, should the exemption become law, it would be a good start for parents and students to lobby for parking lot firearm exemption policies on campus.

SB 115 cannot be allowed to become law. A gun free zone is a killing zone and bureaucrats should never be rewarded for breaking the law.

Posted by nevadacarry at 7:24 PM