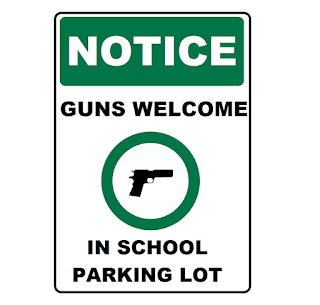 Remember SB 115, the library gun free zone/open carry revenge bill? Well, the Assembly Judiciary Committee held its hearing on the bill Tuesday, May 10th. Guess what came out of it? A Democrat who supports campus carry! Earlier, we predicted this as a possible outcome.

Senator Denis’ proposed an amendment which amounts to campus carry lite. Under his amendment, it would be legal at many schools, college/universities, libraries, etc. to openly carry or carry concealed in the parking lot or have a gun in your car. That’s right; Senator Denis approves of citizens having guns in plain sight on campus. Basically, what his amendment does far surpasses SB 102-the dead parking lot exemption bill from Republican Senator Settlemyer which only decriminalized guns in locked or occupied cars. Under Senator Denis' amendment, schools, colleges/universities, and libraries would have a blank check to be as pro-gun in the parking lots as they wanted.

One of the major objections to SB 115 was regarding books drop-offs or taxi and rideshare drivers inadvertently breaking the law by going into a library parking lot. The caveat is that such a policy would be discretionary and creates an illusion of a solution. Denis’ intended “checkmate” to overcome these objections back into basically the same problem he faced before. Libraries could easily ban such conduct if they wanted, and libraries making up the rules as they go is the whole problem here.

LINK: Guide to Articles About the Library Open Carry Issue

The first problem is that the policy to create the exemption is not mandatory, meaning that a library wouldn’t have to a parking lot exemption at all. Even if they did, it could be as narrow or broad as they liked. If libraries wouldn’t follow the law now, do you trust them to make an exemption to protect you now?

This is a cop-out from a mandatory parking lot exemption because Denis’ made a huge mistake in tying libraries to schools. He can’t make a mandatory exemption to library only parking lots because it would make him a hypocrite on his alleged reasoning of the “need” for SB 115. If he applies it equally, as he is claiming he is trying to do with his law, he creates de facto campus carry. As this bill stands, many pro-gun and rural schools, libraries, etc. could very easily make very liberal parking lot carry policies allowing even open carry.

If this passes as-is, it will lead to more and more schools and etc. adopting pro-gun policies, slowly bringing down the wall of resistance to true campus carry. Does Senator Denis really want to be known as the guy who got the campus carry ball rolling in Nevada? Even if he amends his amendment, he falls into one of the traps we’ve outlined before. It’s a no-win situation for Democrats.

Second, this amendment goes against the whole idea of state preemption of firearm laws, which has been in effect since the 1980s, that is a patchwork of policies are a bad idea. Optional policies, the terms of which can be broad or narrow and set individual, are a can of worms.
Without extensive prior research, there would be no telling if it is legal to cross that threshold from the street or not. These “policies” adopted could vary so widely that any supposed “advantages” may be meaningless.

The amendment raised questions as to how such a policy would be implemented. Will a library district exempt some branches and not others? Will certain schools or school districts be okay with guns in the parking lot? What if the Henderson libraries ban guns in parking lots, but LVCCLD does not? How many citizens could accurately tell you what district a library belongs in? And who will oversee the policies to see they are fairly implemented? The LVCCLD board of trustees totally ignored its administrators flagrant violation of the law.

If we cannot trust LVCCLD to obey state law in the first place—to the extent they try to re-write it altogether to justify their crimes—how can we trust them to implement a fair policy? All they had to do was acknowledge the fact that open carry is legal in a public building and leave it at that, but instead, at every opportunity, they chose to do the wrong thing. With this kind of track record, they have shown they are unworthy of discretion, not to mention there is no legitimate need for this bill.

Once again I remind the reader that SB 115 exists because citizens dared challenge LVCCLD’s illegal ban on legally openly carried firearms. SB 115 would set a horrible precedent that would encourage government officials to violate laws they disagree with, then pass laws to condone their behavior once citizens challenge the law. In a democratic and constitutional society, this amounts to tyranny. Any statesman or jurist of repute cannot allow this behavior. Today, it might be gun free zones in libraries. Tomorrow, it could be anything you can imagine.

At the very least, should the worst come to pass, those in rural counties or with right-minded principals and trustees might have Senator Denis to thank for campus carry lite.

The bill is up for a work session next Tuesday, March 16. Learn the history behind the SB 115 and the illegal activities of LVCCLD. You can use the email links below to email members of the Assembly Judiciary Committee.

Posted by nevadacarry at 5:06 PM