Questions for 'Nevadans' for Background Checks

If you meet someone collecting signatures for 'Nevadans' for Background Checks, ask them the following questions. But remember that most signature gatherers are paid by the signature and will lie or say anything to get a signature, so take their word with a grain of salt.


About how many guns are sold in face-to-face transactions? About 10 percent.

How do most criminals get their guns? Theft, straw purchases, and illegal street deals.
About many people were convicted of a gun violation after failing a background check? 44.
Posted by nevadacarry at 9:22 PM No comments:

Silencer Co. has made this nice graphic explaining how silencers work and that they are indeed legal.

Posted by nevadacarry at 9:20 PM No comments:

Infographic: How Guns Are Used Every Year in the USA

Posted by nevadacarry at 9:19 PM No comments:

Email ThisBlogThis!Share to TwitterShare to FacebookShare to Pinterest
Labels: graphic, gun use, infographic

Recently, I was asked for recommendation for guns and ammo. Well, here goes.

These are my own personal recommendations based on my own experiences only.

Online Ammo (only those with 'in-stock' products!)
http://www.bangitammo.com/

For recommendations for shooting and concealed weapon permit instructors, please email me.

In this article, the NRA debunks the three most popular myths regarding the 2nd Amendment.

Myth #2: The Second Amendment specifies that owning a gun is only for serving in “a Well-regulated militia”—what we now call the National Guard.

Myth #3: The Founding Fathers couldn’t have foreseen the technological developments that have led to such things as “assault weapons.”
Posted by nevadacarry at 9:16 PM No comments:

Nevada Carry, an organization and website dedicated to promoting the right to safe and legal open and concealed carry of firearms in Nevada, would like to publicly support Kroger in its recent decision to trust their customers to carry firearms responsible when shopping. Kroger has ignored the unreasonable demand by a small, but vocal anti-2nd Amendment group backed by wealthy donors and interest groups. It is clear that this interest group does not represent the will of the majority of Americans, and by spending money, seeks to promote the false notion that the longer American tradition of keeping and bearing arms is on the decline. Rather, support by average Americans for their 2nd Amendment rights has never been stronger.

It is deplorable that this group, which has less influence than it does money and an abundance of emotionally charged and fallacious advertising, seeks to force Kroger to meet their demands through force of humiliation. This group would prefer defenseless citizens, disseminates propaganda, and attempts to crush all opposition.

Every Nevadan who may legally possess a firearm has the right to openly carry a firearm for their protection. While private businesses may decide on permissible conduct upon their premises, Kroger has stated that armed citizens obeying their local laws are welcome to shop at their stores. They have not bowed to the pressure of an extremist organization that seeks to deprive Americans of their natural right of self-defense and force other private entities

Nevada Carry supports Kroger in refusing to compromise with this organization that is short on facts, high on emotion, and engages in bully tactics to make Americans less safe and deprive them of their rights. Every business that ignores the taunts of a bully deserves our money.
Posted by nevadacarry at 9:14 PM No comments: 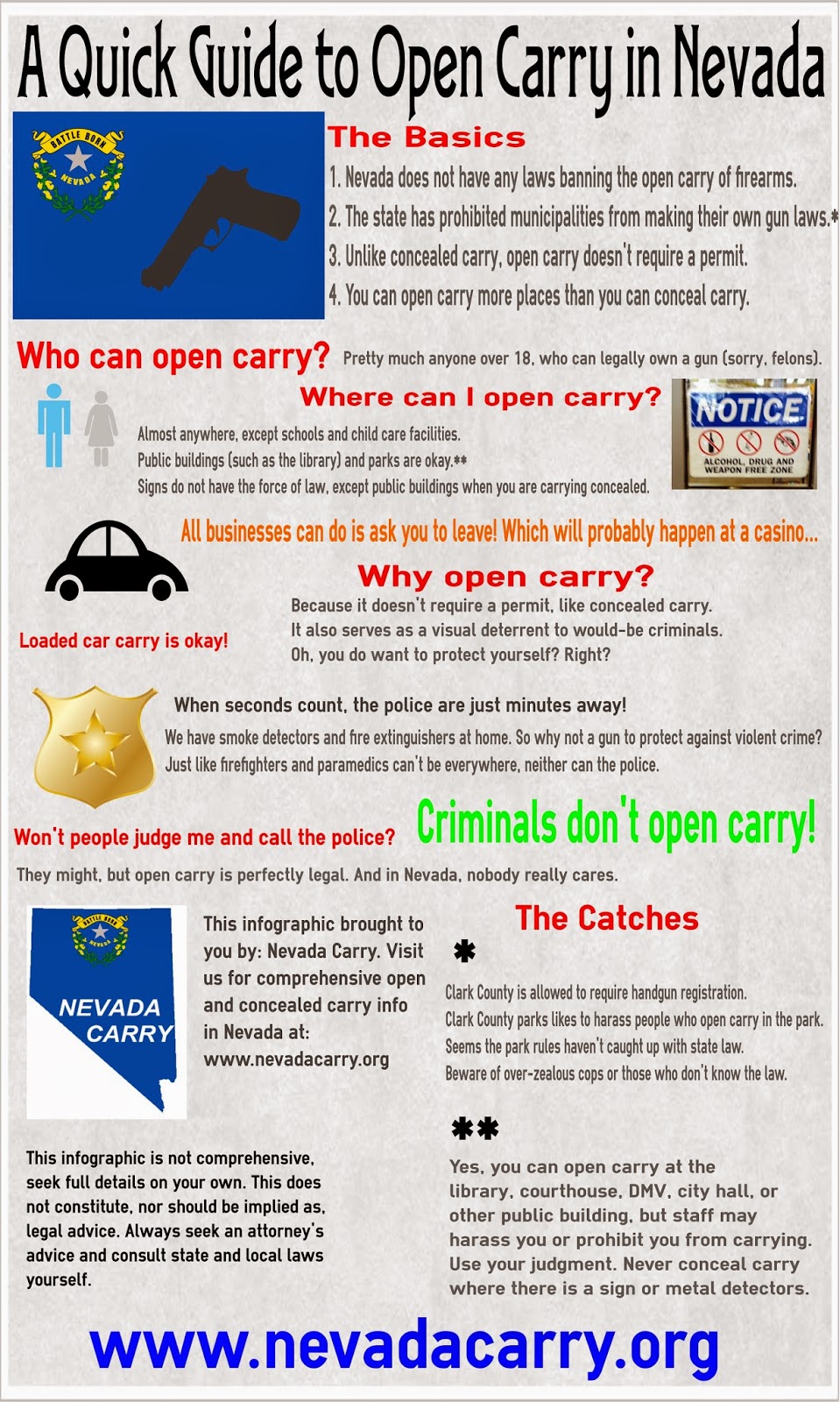