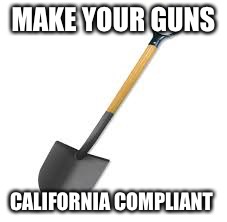 Beginning Jan 1. 2018, it is illegal to import ammunition into California. See text of Prop 63 or this article for details. That means while you can buy it here, you can't bring it back into California. However, it is perfectly legal to use high capacity magazines and ammo in Nevada. California laws cannot be enforced outside of California. But California can and does spy on buyers here.

Buying what you can't get in California in Nevada? Be smart about it. Definitely don't buy firearms; that can bring federal charges and ruins private sales for the rest of us. CA DOJ agents have been known to unscrupulously surveille Nevada gun shows to identify California buyers purchasing items prohibited in California and then have them stopped by CHP or local law enforcement once they have crossed the border. If you are at a gun show or Nevada retailer, be very careful not to give these agents any probable cause.

Agents have typically identified Californians by clothing that announces that one likely is a California resident. They then follow the suspects, observe their purchases, follow them to their vehicle (bearing California plate), and once the vehicle crosses the border, marked units make a traffic stop. Of course, getting into a Nevada resident's vehicle (or a rental) that didn't immediately go back into California would ruin that scheme.

Developing a case requires constant, continuous surveillance to maintain a "chain of custody" of the prohibited items in the possession of the "suspect." Such surveillance would be thrown off if the "suspect" went back to their hotel room for an extended period of time or if the ammo or item was handed off multiple times at the gun show, especially to a Nevada resident. Agents also don't have days to keep people under constant observation, so those on multi-day visits, versus immediately going back to California would make the agents' probable cause difficult to establish.

Only idiots talk to the police and give them consent to search. Remember the phrase “I don’t answer questions and I don’t consent to searches.” Anything you can be twisted and used against you.

Any identified or suspected California DOJ agents or California police officers "on the job" out of state would have their cover compromised if gun show patrons loudly pointed out these petty tyrants and demanded the show operators eject these persons from the show. Local police have also been rumored to have escorted such agents out.

Nevada retailers are better off not asking Californians about where they're from or what they're buying. California has filed frivolous law suits against retailers out-of-state before.

If you are breaking a tyrannical, unconstitutional law, be smart about it and be prepared to face the consequences.
Posted by nevadacarry at 5:58 PM