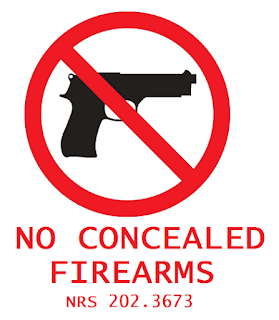 Two Reno-area concealed carriers, Justin and Domonique Bailey, recently admitted to My News 4 that they violated state law by illegally carrying concealed in a public building. Both claimed not to know it was illegal because they were not properly searched by security guards and only saw the "no guns" signs after they left the basketball game they were attending at the Reno Events Center, operated by the Reno-Sparks Convention and Visitors Authority, a government entity. Banning concealed carry in public buildings is discretionary in Nevada.

The Baileys claim that they did not see the signs is not an excuse for their willful violation of state law. They either knew or should have known that concealed carry beyond the metal detector was illegal. Signs are a nice reminder in this case, but not required because the security screening and metal detectors are warning enough. Simple ignorance of the law (they never read the relevant section), or negligence to properly understand the law (didn't pay attention in CCW class), is irresponsible and inexcusable.

As self-admitted concealed firearm permittees, the Baileys were required to take an eight hour course which explained NRS 202.3673, which prohibits concealed carry where there is "a metal detector at each public entrance" or "no gun" signs. The fact that metal detectors are used for weapons scanning is meant to be a commonsense understanding that weapons are prohibited. Security isn't checking for contraband popcorn and candy.

As concealed firearm permittees, the Baileys have an obligation to know and follow the law. Just as gun rights activists and citizen carriers require that the government respect our rights, particularly that of open carry, every concealed carrier has duty to obey the law as well. My speculation is that they didn't fully understand the law and didn't make any effort to fully understand it. I get emails all the time asking simple questions that indicate either a failure to read the website or an absence of reading comprehension skills. Stupidity is not an excuse.

This incident occurred back in February, but a news interview by the head of ESI Security prompted the Baileys to come forward, as they told My News 4. Perhaps they were truly concerned about the lax security and unprofessional guards. Whatever the reason, the Baileys made two very stupid mistakes. Certainly, if they were able to lookup the CEO of the security company and contact him, the Baileys were competent enough to do their due diligence to double check the law to realize that they had indeed broken it before admitting to it on television.

Confessing to their violation of the law, a misdemeanor, within the statute of limitations is a very foolish idea. The Baileys exposed nothing but their own ignorance. If they took umbrage with the quality of ESI Security, there are other methods to raise their concerns. One wonders what would have happened had ESI discovered the firearms; perhaps Washoe County District Attorney Hicks or City Attorney  Hall would have secured a plea bargain by now.

As for NRS 202.3673 is concerned, the law is absurd. It seeks to disarm those who have been trained and vetted for the carry of firearms. Ironically, concealed carry in a prohibited public building by a non-licensee (someone carrying concealed illegally) is not a violation of this section. As a whole, concealed carriers are typically more law abiding and less violent than even police officers. Security screening is often just security theater, meant to deter the undetermined and provide an comforting illusion of security.

Banning licensed concealed carry in public buildings does not enhance safety. Criminals and terrorists remain undeterred, especially when coupled with ineffective security measures. Disarmed citizens then become easy prey for killers. Even if security is beefed up to make carry within the venue unnecessary, criminals can target persons on the surrounding streets and parking lots while terrorists can attack the security lines or congested areas outside, as we have seen recently in Manchester and in the Brussels airport attack.

NRS 202.3673 needs to be replaced by explicitly allowing open and concealed carry in public buildings, excepting places like courthouses and detention facilities with mandated lock-boxes at the entrances. No convention center, school, library, city hall, etc. is safe because law-abiding, trained, and vetted gun owners are disarmed inside.

As far as the Baileys, if they are so ignorant of the law that they are required to know, and dumb enough to admit to it on TV, do they deserve to have CCWs if they can't follow the terms? As much as I disdain the idea of a permit to exercise a constitutional right, perhaps a permit revocation and fine would make an example of the Baileys pour encourager les autres to know and follow the law. Again, if the gun community demands the government follow the law to the letter, than so must we, consequences included.

Know before you go. With instructors and a resource like NevadaCarry.org, there is absolutely no excuse for gun owners to be ignorant of the law. Unfortunately, far too many armed citizens exhibit a dearth of knowledge of our gun laws and an equal lack of interest in educating themselves and others. I have spent considerable time, effort, and money to educate Nevadans and I find it a shame that people take such a responsibility as carrying a gun so cavalierly. And for heaven's sake folks; at least email me before going to the local news and cramming your foot in your mouth.

Comments from the city and district attorney offices have been requested.