Nevada Carry was forwarded a copy of this letter from the Commander of the Clark County Park Police. This confirms that they have seen the light and the former ban on guns in parks is now history.

Cdr. Michael does have a point. However unpopular, officers must enforce the laws they are sworn to protect. That is a very basic fundamental of modern law enforcement in civilized society. However, discretion is a major element in enforcement.

The exception the author of this letter takes, as well as others in the firearms community, is the attitude seen by law enforcement that any breach of the law must be enforced. As the original post on the park's gun ban detailed, the legal justification for it was a rather large stretch. Literally nowhere else in Clark County was such a ban defended with such zeal, reaching to the level of the Attorney General.

At whose behest would such an opinion be written? Surely District Attorney Roger had more pressing concerns, such as felonies, not simple misdemeanor violations of park ordinances.

The issue seems to stem from an email conversation between Cdr. Michael and a noted Las Vegas open carry activist, Tim Farrell, who was illegally detained for open carrying on the Strip.

Mr. Farrell rightfully disagreed that preemption did not allow the park district to continue its unlawful prohibition against firearms in a county park. Cdr. Michael countered that it did so and that the DA agreed. The "intent and authority of the County Code [was] to keep the parks safe from the presence of firearms." Anthropomorphic firearms that go around wantonly killing people, apparently taking on the evil ability to shoot themselves and convince their owners to commit crimes.

The assertion that parks must be kept safe from firearms is laughable, as if there was something about parks that made guns or people more evil than the world outside. Parks do need firearms. The police have no duty to protect you. A few hundred acres of green grass, trees, playgrounds, and ponds do not make someplace any different than anywhere else in the world. Evil does not discriminate.

An enhanced preemption bill, like the ones that passed this year, ended up being defeated in the legislature that year. Probably a little rattled and yet emboldened, the DA went to the Attorney General and managed to get her to fit the park gun ban to wiggle through the exemption that was intended for handgun registration.

Thankfully, all that's moot. Any arrest for legally carrying a handgun in a county park now would be a very bad thing for an officer to do and in October, will get his and his department's pants sued off.

Yet the attitude is pretty clear. Cdr. Michael never wanted you to carry to a gun in the park and probably still doesn't. His attitude is remarkably even, yet bears a faint undertone of being supercilious; that he is forced to acknowledge this truth at last. That attitude is something we have seen with Metro, who scrambled to put out a memo to its officers, only making it public when new media types like Nevada Carry asked for it.

Attitude in policing is at the heart of the issue that we are deciding today. Many in our urban minority communities are rebelling (whether righteously or grossly improperly) against police they view as corrupt and unresponsive to their actual policing needs. Policing can be friendly, targeting those who commit crimes of evil and harm, or they can target those who violate arbitrary laws, made by men who think they know better. The Clark County firearm regulations were in the category of laws made by men who thought they knew better. The boot has tried to lie heavily upon us, but we resisted.

The police are the ones who must enforce the laws. They are the ones who see the immediate value and utility of a law. Having grounds to detain or arrest someone gives them great leeway in being able to effectively do their job. Making it criminal to possess a gun in a park is the perfect way to arrest an undesirable person and preserve the peace that the officer is interested in. While individual officers' opinions vary wildly on the subject of an armed citizenry, the institution of law enforcement does not like armed citizens.

Returning to the concept of discretion, how much discretion would a Clark County park police officer shown an open carrier, ignorant of the very fine print on the very faded, over grown signs at the entrance to Sunset Park? Would they have asked them nicely to leave, or would they have confiscated the firearm and slapped them with a misdemeanor promise to appear citation? 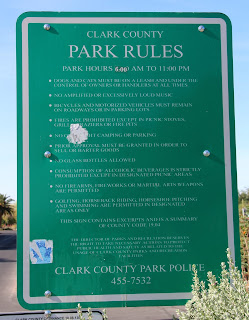 Videos from across the country of places less tolerant to open carry, Texas in particular, give us the answer.

While the vast majority of police officers will suffer in the heat and cold, dodge traffic, and give their lives for us, it is the institution of law enforcement that we must watch like a hawk.
Posted by nevadacarry at 8:22 PM