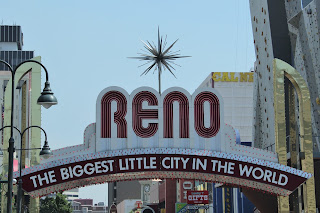 Boy! Northern Nevada sure does have a lot of broken “no guns” signs! Well, to be fair, so does Southern Nevada, but the ratio of plastered buildings at least felt a little higher in Reno than it does in the Las Vegas area. I visited the area recently and was in awe of the natural and historic beauty of the area. One of my eyes was on history, while the other was on the Second Amendment landscape.

Everywhere I went, large signs prohibiting all firearms, openly carried or concealed, were on public buildings. As you know, only concealed firearm are prohibited in public (government) buildings in Nevada. Openly carried firearms are permitted by state law in all non-school or college/university facilities. However, I believe that the city of Henderson is the only municipality which has the correct signage on its buildings. 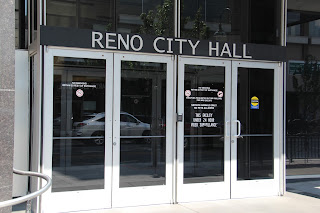 Being misleading, these absolutist “no guns” signs deter those who would openly carry legally, even if just shuffling their pistol from open to concealed for their visit to the public building. Instead of making the buildings more safe, the signs make them less safe. If I were a non-gun owner, I wonder if there is a reason that guns are so boldly prohibited inside and feel all the less comforted by them. Surely, there must have been some horrible incident to require garish signage.

In reality, the truth behind the signs is government control; officials don’t want armed staff and citizens inside. The signs are nothing more than an illogical expression of fear and misunderstanding. Government officials rarely take action to correct the incorrect signs; a Reno official admitted to one armed citizen that the city knew open carry was allowed, but wasn’t going to be correcting the signs. My own experience with state officials illustrated this governmental contemptuousness perfectly.

The Nevada State Museum in Carson City has a small, but impressive, collection of antique, historic, and rare firearms, including a Gatling gun. It too is plastered with “no guns” signs. After clearing the entry desk without trouble, after a minute or two I was contacted by staff who informed me about the signs. In fact, that’s how most “you can’t have a gun here” conversations begin. “We have ‘no gun’ signs on the door.” Well that’s nice… one thinks.

I informed the security officer of state law. He seemed a bit puzzled, but was very polite and genuinely willing to listen. He asked if I might explain it to his supervisor. Being concerned about education and conciliation, I agreed. The guard came back a few minutes later and told me the supervisor had looked into it (probably phoned the capitol police) and agreed with my assessment of open carry, which is also the opinion of the Legislature’s own attorneys. That was it, I went on with my visit.

A far different version of events than with the Las Vegas Clark County Library District (LVCCLD), to be sure.

In my follow-up to the facilities director, I gave my thanks to the professionalism of the staff and the outstanding way the issue was resolved. What I didn’t say was that had the state bothered to properly inform its security personnel on state law, none of this would have ever happened and the nice guard wouldn’t have been embarrassed by the whole thing. It is an obscure and counter-intuitive point of law (even California allows licensed CCW in most public buildings).
I pointed out that it was rather unfortunate that Nevada had placed misguided suspicion on armed citizens—especially licensed concealed carriers with their training, background checks, and whatnot—and looked forward to the day when our legislators understood that legally armed citizens are an asset to public safety, and not a liability to be feared.

I received a terse reply from the museum director, Myron Freedman, who said that “Posting is required.” I don’t get the feeling that Mr. Freedman is all that keen on understanding or citizens standing up against petty bureaucracy. Freedman, a native of Nevada, has had a career with museums in notoriously anti-gun climates such as California and Chicago. Posting is required, but that is a topic for a later post.

What armed citizens want is to be able to defend themselves wherever evil might strike, which can literally be anywhere at any time. Of course, there is a limit to this; none of us seriously want to be able to carry inside prisons, for example. Yet what makes the Nevada State Museum immune from violence? How will the unarmed guards stop a team of determined robbers from making off with the silver, guns, and artifacts? Will the signage leap down and tackle a deranged gunman who picked the building at random?

There is nothing inherently safe about a museum or the majority of most public buildings. Even if the risk of violence is extraordinarily low inside, why should I be disarmed going to and from? A low risk of violence is often used to discredit the need for carry inside prohibited buildings, but that same low risk of violence is justification for the lack of any need to post the signs in the first place. “No guns” signs are not about safety, they are about the comfort of government officials.

Among my open carry travels, this was the only negative incident. Hell, in Virginia City the only thing that stood out was a plastic holster and a Glock instead of leather and a revolver. Up and down the state, urban and rural, the responses were either positive or non-existent. During my photography session outside the Capitol complex, no one took exception to me at all. Not having business inside, I didn’t try to force the issue with the Capitol Police.

Ultimately, what divides the Nevada open carry “movement” from other open carry movements is that by and large, open carry is a lifestyle choice, not a political statement. We who openly carry generally don’t go out seeking confrontation. The Flores library open carry case came about simply because Mrs. Flores carries openly every day. This is our strength; since this is a part of our regular lives, when an incident occurs it has far more impact than it were a stunt. Stunts turn people off to open carry. If a test case is needed, we can do it simply by being ourselves.

Aspersions about our intentions dog open carriers the way that concealed carried was demonized as a prelude to murder a hundred years ago. Some would call us paranoid for carrying, but couldn’t a similar accusation be leveled at people with dashcams? I didn’t feel any less safe in downtown Reno than I do in downtown Las Vegas, but it sure was nice knowing I could handle anything serious, should it come up. And that’s what everyday carry is about: being prepared to shoot your way out of a mass shooting, robbery, etc. One never truly knows where violence will strike and there is no soft security measure that will keep people safe.

In time, things will change. A favorable ruling in the Flores case over preemption will go along way at smoothing out wrinkles with local agencies. We must be patient, but if the many examples of similar cases from across the country tell us anything, we will be victorious. The larger battle is changing minds within government. Legislators do not need pushed into creating bad legislation, like the malleable Sen. Denis who tried to change the law because LVCCLD didn’t like it. What we as the armed public must do is help change the minds of government employees.

Employees of public buildings are vulnerable to violence. No one deserves to be disarmed at their workplace unless it is absolutely necessary for other safety considerations. Neither should they be afraid of legally armed citizens patronizing government facilities, which exist solely to serve citizens. We must win the employees to our side and deny legislators and anti-gun administrators that constituency at the same time we convince administrators, who might be on the fence, that there is no danger from the legally armed.

Hostility will not win us anything. If we create enemies instead of allies, we face an uphill battle. Let us investigate and educate, winning supporters and changing the decades old fearful mindset that discriminates against law-abiding, legally armed citizens.

Posted by nevadacarry at 6:47 PM