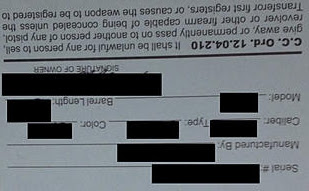 Update: As of this evening, 3/11/2015, still no reply has been received from the LVMPD. An email has been sent to confirm the status of the request. It appears that LVMPD has illegally stonewalled the request. Nevada Carry will contact members of the legislature to inform them of this intransigence and attempt to get this information which is vital to the public in this legislative session so focused on gun rights.

Update: As of this morning, 2/26/2015, no reply had been received from the LVMPD, despite having received a return receipt signed and dated 2/11/2015. This is far beyond the five-day deadline imposed by NRS 239. Several state legislators were contacted and apprised of the situation. They are willing to help obtain the documentation if necessary. However, this afternoon, the PIO unit responded that they had not received any such request. Not very inspiring to think that the police can lose mail. Fortunately, Metro is processing Nevada Carry's email request. We hope they respond within the required five-day time frame this time.

Nevada Carry will share the information received with the Nevada firearms community and the state legislature so that Nevada can make an informed decision on the value of the 'blue card' system.

Recent legislation (AB 127) (among others) has been introduced to eliminate the Clark County handgun registration scheme, aka ‘blue cards’, administered by the LVMPD. Clark County is the only county in the state permitted to have such a program. Sheriff Lombardo agreed in his campaign that the program needs to go away.

Nevada Carry is seeking data on the Clark County handgun registration scheme, ‘blue cards’, as authorized by a Clark County ordinance, and grandfathered under pre-emption by NRS 244.364. Our goal is to analyze the data provided and determine if there is any benefit to this system (does it work?). We seek to also document the size and scope of the registry and its cost to Clark County residents.

Lt. Chuck Callaway, director of LVMPD’s Intergovernmental Services, said to CBS Channel 8 News: "Gun registration is a valuable tool for law enforcement, an investigative tool." All we are asking LVMPD to do is prove it.

On January 26 and 27, 2015, Nevada Carry emailed both the Las Vegas Metropolitan Police Department’s PIO and financial crimes (responsible for the blue card system) mailboxes with questions pertaining to the system. Both emails were ignored. No response was received.


As of today, February 7, 2015, Nevada Carry has sent by certified mail a freedom of information request pursuant to the Nevada Open Records Act § 239 et seq. The LVMPD has five business days from receipt of the written request to respond with our request for information (NRS 239.0107). I have included the text of the letter sent to the LVMPD.

None of the information being sought could be reasonably construed as confidential. They are simply facts and figures. We are not requesting any personally identifying information, only statistics. Since the information affects the public, as we are required to register, and it involves the use of public information, it would be hard to imagine why the LVMPD would be reluctant to release this information.

The genesis of the is program was apparently to target mobsters in early Las Vegas’ heyday, according to a 2012 article in the Las Vegas Review Journal.

“Seven decades ago, Lucky Luciano, Frank Costello, Meyer Lansky and their pals from New York decided that Clark County was ripe for expanding mob operations, and organized crime arrived in Las Vegas - complete with armed "soldiers" for protection and muscle. In response, the county adopted the ordinance requiring the registration of handguns. (The idea probably came from California, where some form of handgun registration has been required since at least the end of World War I.) It was assumed that the mobsters wouldn't comply so, with few legal restrictions on search and seizure back then, the new ordinance provided law enforcement with some serious leverage.”

The LVRJ goes on to explain a 2012 attempt to gather information on the program:


“A recent exchange of letters between Gillespie and County Commissioner Tom Collins provided some fascinating insight into Metro's Firearm Registration Unit - and perhaps into the general management practices of the department.

“The Firearm Registration Unit's database contains information on more than 1 million handguns. You'd think that management might find it useful to know how often this information is accessed, or how many arrests, citations or convictions have resulted from it. How many investigative leads are produced? How many handguns are seized each year for failure to register?

“If you thought that such information might be a significant management tool, you'd be wrong. To each such question, the sheriff told Collins the information wasn't, tracked.
“Furthermore, because the Firearm Registration Unit isn't a budget line item, the sheriff said he couldn't provide any information on expenditures for either the unit itself or the related data processing.

So after 60 years of operation, the sheriff seems to know nothing about the program he so vigorously defends. Collins asked for "objective data" that would lead a reasonable person to conclude that the handgun registration program had real law-enforcement benefit to Clark County. The sheriff's response: ‘Officers benefit from the use of the database every day. If it did not provide valuable investigative leads, it would not be accessed by the officers.’"

So if officers benefit from the registration database, how do they utilize it and what is the benefit to public safety? What are the numbers of crimes that were solved by the database, particularly violent crimes?

Unfortunately, the LVMPD seems to be stymieing any attempt to learn factual details about the program.

It’s time for the LVMPD step up, gather that information, and provide it to the public. If they support a program that curtails the right of Nevadan’s to keep and bear arms and claim it works, they need to document their beliefs. Government is accountable to the people. Excuses, lazy answers, and failure to document such a large program that is allegedly instrumental to public safety is massively incompetent.

Don't get us wrong. We are not out to skewer the police. Nevada Carry highly supports the police (the author and president is former law enforcement). All we are asking for is accountability and we would like to see this questionably effective program's money and personnel channeled into proactive crime fighting.

We hope for cooperation from the LVMPD and a swift, comprehensive answer to our inquiry. Furthermore, we urge the legislature to pass AB 127 to end Clark County’s handgun registration scheme. Let’s get that money to the cops on the street.

Under the Nevada Open Records Act § 239 et seq., I am requesting an opportunity to inspect or obtain copies of public records that detail the scope, cost of administration, and violations of the Clark County handgun registration system (‘blue cards’), Clark County Code § 12.04 et seq. as authorized by NRS 244.364.

Specifically, I am seeking the following data from the most recent statistics:


If there are any fees for searching or copying these records, please inform me if the cost will exceed $ 25. However, I would also like to request a waiver of all fees in that the disclosure of the requested information is in the public interest and will contribute significantly to the public’s understanding of Clark County handgun registration. I am a journalist blogger for the gun rights organization Nevada Carry. This information is not being sought for commercial purposes.

If access to the records I am requesting will take longer than a ‘reasonable’ amount of time, please contact me with information about when I might expect copies or the ability to inspect the requested records.

If you deny any or all of this request, please cite each specific exemption you feel justifies the refusal to release the information and notify me of the appeal procedures available to me under the law in writing.

Thank you for considering my request.
Posted by nevadacarry at 9:13 PM