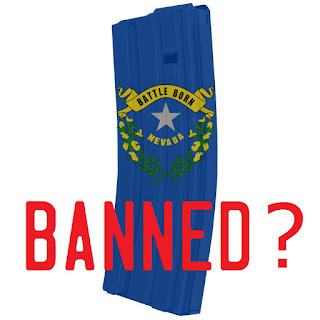 So Clark County’s casino sheriff shows his true colors: he’s an anti-gunner who cares not for your rights. We suspected it a few months ago when he was telling people in private that he supported Ballot Question 1, banning private gun sales. Now Sheriff Joe Lombardo is calling for a high-capacity magazine ban, vomiting up the same tired bullshit that citizens don’t need or deserve them, hinting at the outright mendacity that “the Second Amendment is for hunting.”

Lombardo told the Las Vegas Sun (a liberal mouthpiece) “I’m a very avid hunter, I was in the military myself, and there’s no need to have a high-capacity magazine for any practical reason.”

Since we’re lacking the whole interview, we don’t know the full remarks of his statement, but this one is asinine. The Second Amendment is not about hunting. It is primarily intended to ensure that Americans can effectively rebel and kill agents of a tyrannical, abusive government. No Metro intel division, I have no intention of the sort and don’t know anyone who does.

Second, being in the military should have taught Scummy Joe (his new nickname here) that yes, “high capacity” magazines (actually standard capacity, but more on that later), are necessary for average citizens for the same reasons that Metro officers need them. If “high-cap” mags aren’t needed by average citizens, then there is no reason police officers shouldn’t return to six-shot revolvers and dump pouches.

There is no logical reason why any cop, which Scummy Joe ceased to be the moment he stopped pushing a black and white, should not support citizens owning the most effective tools to defend themselves with. The only possible motivations he could have are political ambitions or hatred for armed citizens; Joe isn't dumb enough to believe that a 17 or 30 round magazine is inherently evil. Whatever the case, his opinion is not based in fact and follows the same faulty logic that all gun control arguments seem to follow.

If Clark County is stupid enough to vote this scumbag back into office in 2018, then this county and Nevada in general is doomed. Mr. Lombardo: you sir stand in violation of your oath to the Constitution and deserve no respect from the citizens you purport to represent or the officers you supervise. Shame on you.

This comment was likely a trial balloon for the legislative session to see what kind of reaction they get. Make sure it’s negative. You can email Scummy Joe at sheriff@lvmpd.com or contact him on Twitter at @Sheriff_LVMPD.

To any legislator or public official actually considering floating this to the legislature because Democrats control it, forget it. Losing Question 1 by a narrow margin woke up Nevada gun owners; any attempt to further turn us into California is going to be fought tooth and nail and will cost you in the mid-terms.


Gun owners: see what happens when you don’t get involved? Don’t let the mistake of Question 1 happen again during this legislative session. Get involved, NOW! More on this later.

Update: Legislators and the president of the Nevada Firearms Coalition oppose any bans. Read more at Newsmax.

Tell the liberal ass-rag the Sun what you think of their anti-gun agenda.


WE ARE LOOKING FOR 30 ROUND AR-15 MAGAZINE DONATIONS FOR A GIVEAWAY. PLEASE EMAIL US IF YOU ARE A VENDOR OR MANUFACTURER WHO IS WILLING TO DONATE.