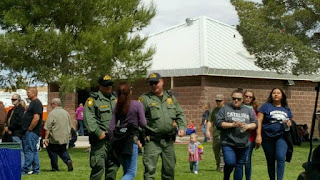 A Las Vegas woman was illegally removed from the Clark County Fair and Rodeo for openly carrying her handgun peacefully. A security guard first approached her and told her that the fairgrounds were “private property.” She reported that she was approached by two LVMPD officers who escorted her to vehicle. The officers told her the fair was a “private event” and that she could not have a firearm there. When she attempted to explain the state preemption ordinances which protected her right to bear arms, she said “I got was the ‘deer in headlights’ look.”

Irony of ironies, this all happened during the live cowboy re-enactment featuring blank pistol and shotgun shots. A security guard also attempted to stand in front of another citizen videotaping the encounter, apparently colluding with the illegal acts. One guard jokingly commented that the footage could be sold on Fox News. She was told by the guards: "this 'private company' [presumably CC Fair Inc.] had a no open carry law and then quickly corrected himself and said policy. Them he said that this 'private company' leased the land from the county which somehow automatically made the fair a 'private property."

As readers are aware, state law prohibits local authorities from regulating firearms, except for unsafe discharge. Additionally, state law only prohibits concealed firearms in public buildings where posted or metal detectors are present at each public entrance (NRS 202.3673). The Clark County Fairgrounds are owned and operated by Clark County Parks and Recreation. The Fair itself is operated by a non-profit corporation, Clark County Fair Inc.

Additionally, a non-profit corporation created to operate a county fair on public fairgrounds only barely meets the definition of a private event. Non-profit corporations are usually used for events of this type as a way to insulate the county from any liability or responsibility from actually operating the event. Clark County Fair Inc. was founded by volunteers. The most solid date for establishment is in 2011. Before that, we have been unable to conclusively determine who operated the fair. CC Fair Inc. it was reported in 2009 that it receives approximately $25,00 t0 $75,000 in grants from the Las Vegas Convention and Visitors Authority (a local government entity). It appears that CC Fair Inc. operates the fair on an unofficial basis for the county.

It would not be inappropriate for a private event operator to choose to exclude persons from their event. However, it is illegal for local authorities, as a condition of using public facilities, to prohibit firearms at an event. It would also be illegal for police officers, on only their own initiative, to prohibit and eject lawfully armed citizens. Based on the county approved rules and state law, it is hard to see how a citizen could be legally prevented from openly carrying a firearm.

The fair rules and regulations do not prohibit firearms and there is no mention in the agreement with the county, or the vendor handbook, as approved by the board of commissioners, to allow exclusion of fair patrons for bearing arms. It is interesting how government officials find it permissible to take punitive actions against citizens exercising their Second Amendment rights, but they would never consider interfering with anyone peacefully exercising their First Amendment rights.

It is curious why LVMPD officers are not aware of the changes to state law that protected this armed citizen’s behavior. Park police even specifically acknowledged the applicability of state preemption laws to parks. This event is just one of several in recent months where LVMPD acted illegally because of the officers ignorance of state law. Thankfully, this even did not result in an illegal arrest.
Posted by nevadacarry at 6:00 AM