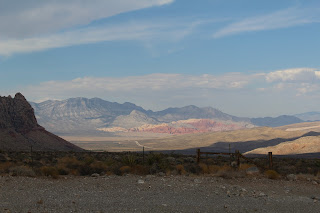 For gun owners, Red Rock is a unique carve-out in Nevada because it is the largest swath of land open to the public where carrying loaded firearms is prohibited. The red rocks and sandstone cliffs of Red Rock Canyon National Conservation Area that dominate the western skyline of Las Vegas is a BLM-administered area, separate from the National Park System, which does allow firearms. Long have local gun owners bemoaned the outmoded regulations without attempting to solve the problem. Congress won’t remedy this right on their own, but we can ourselves.

Readers are aware that state law prohibits local and state agencies from making their own firearm laws, including state parks, except for regulation unsafe discharge of firearms. Some may be familiar with the change to federal law under President Bush’s tenure that permitted firearms in National Parks (including recreation areas like Lake Mead) as long as the weapons are carried in accordance with state law.

Specifically, loaded firearms are prohibited in Red Rock. Ammunition and magazines/clips cannot be on or in the weapon, except for legal hunting as permitted. The excerpt regarding weapons is below, while the full Supplementary Rules are here. The penalty is up to a $1000 fine and/or 12 months in federal prison (43 CFR 8360.0-7).

How stupid is it that you can have a gun, and even carry it on your person, but it has to be unloaded? The rules will not prevent a criminal from carrying illegally or prevent illegal target shooting. There is no benefit of this rule and the few seconds spent loading a gun could be the few seconds that give a bad guy the advantage or allow a cougar to strike. On top of that, it is immoral to effectively disarm the citizens who won’t carry at all because they don’t understand the nuances of the law.

Basic firearm safety dictates a firearm should be handled as infrequently as possible. The best place for it is left alone in its holster. Loading and unloading a firearm introduces unnecessary variables that could lead to a negligent discharge. Creating the potential for an accident negates any alleged gains. Also, in a self-defense scenario when adrenaline is pumping, fine motor reaction is lost, making it more difficult to load and chamber a round before firing.

These rules were added shortly after Red Rock’s official inception as an NCA. The supplementary rules for Red Rock were published in the May 21st, 1993 edition of the Federal Register, which is the federal government’s journal. Federal law allows the interior secretary (via the BLM’s state director) to make supplementary rules and orders for the national conservation areas under his jurisdiction (43 USC § 1701).

Federal law is broken down into three main segments: The United States Code (USC), roughly analogous to the Nevada Revised Statutes (NRS); The Code of Federal Regulations (CFR); and internal federal agency regulations, which are published in the Federal Register. Agencies are authorized by Congress to make regulations in their area of operation, such as the ATF’s various administrative rulings. Now to make specific ‘park’ rules, based on the unique needs of the given area, the BLM’s state administrator can make supplemental rules (43 CFR 8365.1-6), as long as the public is given notice of the proposal and time to make comments.

No other federal ‘parkland’ in Nevada prohibits legally carried self-defense weapons, loaded or unloaded, including the two other conservation areas, Sloan Canyon (south of Henderson), and the Black Rock Desert. Sloan Canyon is managed by the Southern Nevada BLM office, which manages Red Rock.

Only two other Conservation areas, the Wallace Forest in Idaho and the San Pedro Riparian area in Arizona, have firearm possession prohibitions. Both are outdated as well (2000 and 1989, respectively). Even in California, the ‘Lost Coast’ conservation area allows loaded open carry under that state’s quirky carry laws. As mentioned earlier, National Parks and Wildlife Refuges allow firearms in accordance with state law (§ 512. pg. 31 “Credit CARD Act of 2009”), though guns are still prohibited inside federal facilities (18 USC § 1930).

The public should be allowed to carry firearms loaded for self-defense, not just in light of the Second Amendment, but because of the dangers inherent in today’s world. One should not be forced to be disarmed or carry a ‘neutered’ unloaded gun because of an outdated regulation. Heaven forbid anyone is attacked by a cougar or coyote, not to mention potentially being the victim of a crime at, or to/from, Red Rock. The right to loaded self-defense should not disappear because someone crosses an invisible line into a wild desert park. There is nothing inherent in Red Rock that makes visitors any less susceptible to danger.

Taking into consideration the state laws of Nevada and no prohibition on other federal recreational lands, Red Rock’s loaded gun ban is an anachronism. 1993 was a different time in America. Handgun ownership and self-defense carry was not nearly as popular as today and “shall issue” concealed weapon permit laws had yet to come to Nevada and sweep across the nation. As more and more people recognized the need for self-defense weapons and the attitudes in the country have changed, it is time that unusual, out-of-touch regulation disappear.

The rules are not federal law and do not require legislation to change, which would be a pipe dream with the current president. Rather, a gentle campaign of public pressure through petitioning the state director John Ruhs to amend the Supplemental Rules to allow loaded firearms to be carried for self-defense. Additional support could be sought from Nevada’s republican Congressional delegation (the Democrats probably wouldn’t agree).

Public pressure can change things. It may be as simple as a few nice, well-written letters. Imagine if thousands of Nevadan gun owners, hikers, bikers, and concerned citizens petitioned the BLM to restore their right to effective self-defense?

Notwithstanding the supplementary rules, 43 CFR 8365.1-7 says that state still law applies, meaning that Nevada’s concealed carry laws and lack of an open carry prohibition or ban on loaded handguns in cars would not be illegal. So there is recognition of state law already in place, though not as specific as one would hope.

Temporary closure orders for events such as Burning Man would probably require some sort of federal preemption legislation, but given the highly specific nature, limited duration, and legitimate concerns (hippies+drugs+guns=bad idea) make this a more palatable exception rather than an outdated blanket prohibition on loaded firearms.

We are asking for a small change to the law to bring Red Rock in conformity with other federal areas and the rest of Nevada. We are not asking to allow target shooting with its attendant trash and safety problems.

There will always be the leftists (often involved in environmental and outdoors groups) and anti-gunners who will ill-rationally protest the restoration of gun rights, but rights and truth win over hype and lies any day. On top if it all, guns are already allowed in Red Rock, just unloaded. Many practice ‘California open carry’ where the pistol is on one hip, the magazine on the other, and can be loaded in an emergency with a quick reload and rack of the slide. The unloaded guns haven’t hurt anyone or the wildlife; why would loaded guns make any difference?

So Nevada gun owners; are you on board? Sign the petition here!
Posted by nevadacarry at 3:42 PM