Should You Inform a Police Officer That You are Armed? 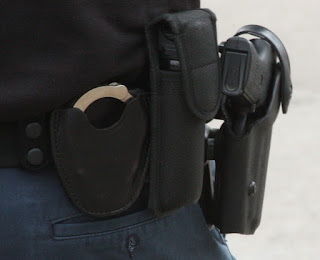 Should you inform a police officer that you are armed, when stopped for traffic or other official contact? The answer is not an automatic yes or no, though some may lean heavily one way or the other for various reasons.  First, let us make it clear that Nevada, along with 80% of the states, has no law requiring volunteering such information to an officer.

That said, it may be obvious to a cop already that you are likely armed (bumper stickers, gun racks, et al) and he can cross reference registered vehicle owners against CCW permit records if he chooses to do so.  Note that if an officer asks, which Nevada law allows, and you are a CCW permit holder carrying concealed, you must answer truthfully.  For whatever reason, most don't ask.  Most officers probably realize it's not that big a deal, as none of their brothers have been shot by someone being open and truthful at the window.

The most common reason I hear for informing an officer is that it shows him respect.  I can't argue with that.  But it implies a fallacy that it is somehow disrespectful to omit this information.  It is not.  As for this respect, the sad truth is that all too often, when a citizen shows such respect to an officer, the respect is not returned in kind. To the contrary, it still causes problems at times.

I wouldn't say that I drive too fast; certainly never too fast for road conditions, but sometimes too fast for the white sign on the road.  Let's put it this way: I drive about the same way you see most cops driving.  So, since I'm not a cop, I've probably been pulled over for traffic stops more frequently than most.  I've used these opportunities to experiment with this issue.  I'd need more fingers to count how many times an officer has responded to my informing with something along the lines of: "That's fine, just don't touch it." 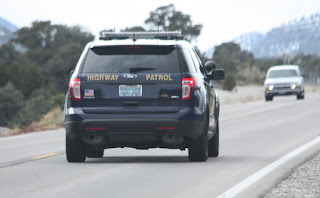 Word count and writing time prohibit multiple specific examples, but my favorite (for lack of a more appropriate word) involves a young state trooper.  I was pulled over for crossing a solid white line (not the gore) to take a freeway exit.  It was the middle of the afternoon, perfect visibility, and not a car anywhere near me; I simply only realized at that moment that that was the only exit for where I needed to go, the proper interchange not yet finished.  But, despite all lack of harm to anyone, it was a legal stop; and he apparently had nothing better to do.  I decided that I was going to inform the officer that I was armed.  When he reached my window, I already had my driver's license, registration, proof of insurance, and CCW permit ready, with the latter on the top of the pile.  I told him that I was licensed and currently armed; half expecting the usual "Thanks for telling me; don't worry about it."  I was genuinely surprised when the polite young man instead told me that for "officer safety" he was going to disarm me.  Apparently, they don't have the same basic firearms safety training that everyone else gets which has 'don't needlessly handle loaded firearms' as one of the basic tenets.

He asks me to exit the vehicle and stand with my hands on top of my head.  So there I am, hands over my head like a criminal being arrested, next to a busy highway, and the exiting freeway traffic is whizzing by.  I'm wondering if he's ever actually calculated his odds of things that decrease his "safety."  He asks where the firearm is.  I tell him: "Holstered inside the waistband behind my right hip."  Now, this holster is simply a nice leather molded holster.  It holds the firearm securely from movement, but doesn’t have any overt retention mechanisms, yet he struggles to pull it from the holster.  He tries several times.  I can feel that he's not pulling it straightly.  How do you offer assistance to this?  It's probably good for me that he has no partner in the car to misread the situation.  After several attempts (all the while I'm praying not to be shot by accident with my own sidearm) I offer to him that if he unsnaps the two straps on the holster, he can remove it entirely, with the firearm safely inside.  He agrees, and does so easily.  This is another time that I'm glad I carry a cocked-and-locked 1911-style pistol with a manual safety lever, as I have no idea (but I'm getting a clue) as to the level of experience this young man has with sidearms.

Here's my favorite part:  After disarming me 'for his safety,' he places me back in my vehicle while he takes my now-known-about firearm to his car, where he removes it from the security of the holster, unloads it without the benefit of a backstop, and proceeds to illegally search its serial number against the then-officially-existing registration database.  He then returned to my window to discuss my minor traffic violation and warn me not to do that.  He then goes back and retrieves my firearm from his car and returns it to me, whereupon now I must either be presumably unarmed or reload it while in a vehicle, which we safety instructors teach to officially avoid when possible.
Now, remember the premise for all of this loaded gun handling?  "Officer safety."  Where was his intense focus and how close to me was he during the disarming?  I hope his grappling skills belie his apparent age.  Where was I after being "disarmed?"  Back in my vehicle, next to a different loaded pistol in the console, and in the company of several armed passengers.  Perhaps we should have shown more "respect" for the officer and done a lot more volunteering and requisite street side strips?  We might still be on the side of the road doing unsafe gun handling and illegal weapons registration checks!

But all that time brings up a valid point favoring informing.  I am convinced that there have been a few occasions where the time it took for the officer to disarm me (and his subsequent antics) have, perhaps even subconsciously, justified his time after pulling me over, and resulted in a warning instead of citation for the actual infraction of which I otherwise was guilty.

So what of my experiences when I did not inform the officer that I was armed?  Only once did he ask, and he did so during his opening remarks, having run a CCW permit records check on the registered owner of my vehicle.  On every other occasion, it was a complete non-issue.  It never came up, nor would have made any difference in the outcome.  Everyone showed respect for everyone and we just did what we had to do so solve our current legal differences.

So there you have it: the choice is yours.  I try not to lean either direction, and decide at the moment whether I will inform or not.  I have not been able to determine a significant difference between jurisdictions; the individual officer makes much more of a difference than whether he is from Metro, NLV, Henderson, Mesquite, Moapa Tribal, the Nevada Highway Patrol, or even the rangers at the Lake Mead NRA (I am proud to say that I've successfully run the gauntlet over Hoover Dam countless times with zero experiences meeting Boulder City's finest.)  You can sometimes get a read on the officer's attitude immediately, or you may know already how much of an ass-chewing you're going to get, and then decide whether informing will add to it or help.  By all means, if gaining access to requested documents will reveal or also gain access to a firearm, I highly recommend you tell him first.  Obviously, you should plan ahead so that documentation is all together and easily accessible on its own to avoid such sudden required thinking under duress.
Take care on our roads, and show some respect, will ya?  To the police, and to yourself. 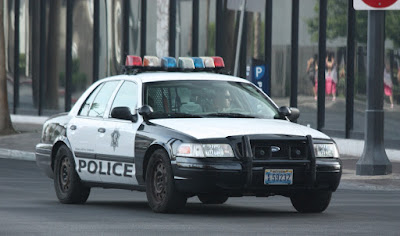 About the author: Mac is US Navy veteran, and a licensed and certified firearms instructor specializing in Nevada firearms laws.  He welcomes comments and questions, time permitting, to blue.gold.firearms.training@gmail.com
Posted by nevadacarry at 7:00 AM