Way back in February, I contacted LVMPD to obtain a Freedom of Information Act (FOIA) request on blue card (handgun registration) data. I wanted to know if the system worked to cut down on gun crime. After a long, drawn out battle to get Metro to comply with the law, I finally got a lack-luster response. Basically, the ordinances requiring handgun registration are a paper tiger.

Metro failed to respond to my first request in February. In March, I finally got a reply that said they would work on it and five days later, I got a reply that said essentially “Give us a month to figure it out.” A month came and went, no reply. Then the PIO told me he was working on it. I got fed up with the bureaucratic mess and filed a complaint with the Attorney General’s Public Integrity Unit. I also sent an email basically demanding that Metro reply and I accused them of stonewalling.

Amazingly, Officer Roybal, a PIO, came through. Though the responses were moving at the speed of bureaucracy, Officer Roybal was pretty pleasant and cool to deal with. I allege that Metro as an institution would be content to ignore my request. If it wasn’t for my regular emails pursuing this, I doubt I would have received an answer at all.

Despite getting an answer from Metro, my complaint still stands. There is no excuse for Metro’s ignorance of my request and the glacial pacing of obtaining this information. Once the AG’s office processes my complaint, I will ask them to investigate why this took so long for Metro comply with my request and determine if there was any wrong-doing.

Ignoring a first request and then taking over 30 days for a simple database query for numbers is rather ridiculous. From my law enforcement days, it would have taken me about an hour run similar statistics, and maybe a day or two if I had to ask one of the crime analysts for help.

How many handguns are registered?

Estimated number of guns registered (total) 1,379,250. Note: these are the numbers of registrations (blue cards), as Metro lack the technology to track weapons which have changed hands.

Arrests (bookings) for possession of an unregistered firearm:

There has been a precipitous decline in unregistered gun arrests in the past years, while gun sales have climbed.

One can draw their own conclusions, but Metro appears to be an agency that doesn’t like the Nevada Open Records Act and its handgun registration system is little more than a filing system. 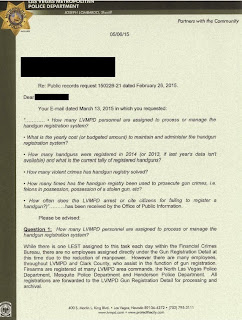 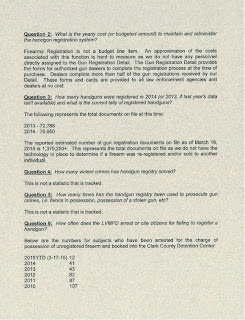 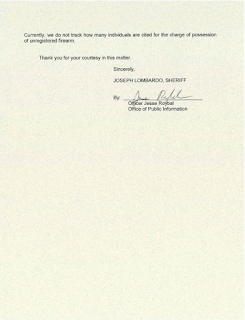 Posted by nevadacarry at 1:26 PM